Grab your Kindle and read the new blast—the brief and brutal bad-arse book.

Unless you're in a nursing home, you haven't got time for War and Peace.
Life is fast. Public transport slow.
Calls for a Turkish coffee type hit.
Short and pure caffeine.
Enter the brutal ebook romp. Stuffed with crime, vengeance, sadistic satisfaction. It covers a minimal timespan. Has characters damaged, deadly. A plot, frightening and full on.
You read facts, mam. Facts. No subtle touches, long descriptions, fancy words.  Just action, brutality and blood.
The good guts. Distilled for quick consumption.
We've recently published two of these. Here's a summary of what you get: 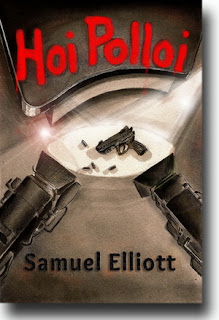 Hoi Polloi is romp that happens in one night, written by Aussie, Samuel Elliott—who's distilled his own experience as a cog in a Sports TV station. Foxtel?
It's the graveyard shift at Premium Sports Australia. The hero, Sam, is coping with his dead-end job when Jerome, a fired employee sneaks back into the building, hell bent on getting his own back on all the patronising shits who've made his life in the place hell.
The two have never been great buddies, but Sam's coerced to go along with Jerome's rampage because he fears Jerome just might have a point. And just might have a gun.
This is a gut-twisting take on what happens when you  badmouth one employee to another. Jerome intends to trash the office but that's just the start. The action, and tension amp up with each event.
This book works because the author knows exactly what it feels like to be shat upon in a heartless corporation with spurious pretentions—in this case, one that grinds out mindless sports programs.
How do we know this? Because this reviewer's been there too, at the beginning of the TV area. In that dark past, there was equal exploitation. People were so desperate to get into television, they could be hired for peanuts. Be warned. Hopefuls who cling to the fringe of media and 'art' mostly cope with a pretty sick scene. 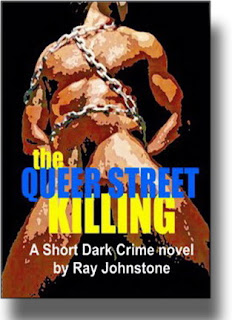 The next book, Queer Street, is the brainwave of Ray Johnstone, another Australian author who runs a hotel in France. Ray has already written All Fall Down—an accomplished young-adult novel about surviving WW2 in Paris. After we published this, he decided to revamp an earlier book—a total switch. A nasty gang-land crime story deliberately written with minimalist directness for the short read ebook market.
Two friends meet at a tough school in a sordid city. When a cruel teacher bashes them both senseless, a blood knot is formed, and their revenge is destined to be sweet.
By their late teens they have built a drug empire. But when a rival gang muscles in, someone has to be wasted and this sparks bloody war between the gangs.
As the body count builds, the Police Chief calls in a bounty hunter to rid his city of the problem. His brief is simple: kill both gang leaders.
Ray has pulled out the stops for this one—inspired by Pulp Fiction and Lock Stock and Two Smoking Barrels.
Crooked cops. Merciless villains. Bashings, murder, torture, and something worse... Because there's a wasteland just out of town. And what happens there isn't nice at all.

So if you like your action fast, spare, brutal and telegraphically written—you could do worse than download these two shockers. No you won't find them on Buzzword. We list our pocket blockbusters on Book Booster.
What's that? Our revamped sister site. You'll find them listed under THRILLERS here
Posted by Buzzword Blog at 05:29 0 comments


Years ago, when this blog started, we asked Clinton Smith to contribute something about good English expression. He then gave us something he originally wrote for the advertising and marketing weekly, B&T (published in 1985) which he revised for the blog. The other day we came across it again and decided to reissue it. Because the need is great, as there are now fewer workers in the vinyard. ('Fewer', note, not 'less'.).

Since the rudiments of English were banished from Australian curricula, even university graduates exhibit their ignorance when they speak.


As for the frantic yobbos in the media, they no longer even understand the difference between singular and plural constructions.


'There's (there is) fifteen people in the waiting room.' This has become the endemic slipshod truncation. Now even news bulletins don't bother with the elision there're (there are). It means that people hear the dreaded 'is' so often that they begin to think it's correct.
'The flooding and destruction is considered to be worse than...'


It IS (singular) They ARE (plural). Is this hard? Apparently so. Because even ABC presenters consistently get it wrong. My nose is cold. My hands and my nose are cold. My dad was going. My aunt and my dad were going.


Then, nominative and objective case: Fred and I (subject) saw (verb) dad (object).


It hasn't quite become that silly yet, but it's close.


'The massive unrest in the country has now escalated.'


What coven of editors insists on this stupid 'unrest'? Have they never heard of violence, brutality, disorder, disruption, agitation? Why persist with this lame weasel word? And their famous 'unrest' inevitably escalates. It never increases, elevates, expands, swells, extends or magnifies.


The hapless victims of 'unrest' are inevitably 'hospitalised' Yuck! (It's been thirty years since they just went to hospital.)


Then there's the hideous 'prestigious'. The word prestige originally meant imposture. It does again when 'ious' is tacked on. This non-word is the staple of a real-estate industry that can't extend beyond cheap labels to language. (Influential perhaps, distinguished, distinctive, reputable, impressive?) You see how language dies when an idiot word becomes entrenched? As for real estate agents, their properties inevitably 'boast' an extensive terrace or double car port. Boast? Give it a rest. Features, perhaps? There's nothing creative about  minds that reach for hammers instead of colours, moods and tones.


As for 'proven'. Today, everything is 'proven' - even though the strong, honest and right past participle remains 'proved'. Proven is an archaic Scottish legal term.


Then there is the bastard lingo of business-speak. One example will suffice.


Proactive. What on earth does this adopted American horror mean? Use positive, intentional… anything but this.


And what of officialise? This cant of posturing obfuscators is supposed to make threadbare statements portentous.
In respect of... (concerning, about).
With reference to... (about, regarding).
Within the realms of possibility... (possible).
At this point of time... (now).
Give consideration to... (consider).
Will become a reality... (will happen).
Behaviour pattern... (behaviour).
Bring under control... (control, manage).
As follows... (follows).


Things are as bad with the weather. It used to rain. Now we have a 'rain event', although 'climatic conditions', thank God, seems a stupidity in decline. And, of course, car yards no longer have sales. That's too simple. They now, inevitably, have a SALE EVENT.


By the way, people are whos not that’s. The person that I saw. Wrong! Unless it was a cyborg. The person who, please. Whom, if you're over 80.


The longer construction is generally worse because it replaces emphasis with length. If simplicity was good enough for Shakespeare, it's good enough for you.
So... Transport. Not 'transportation'. Administer. Not 'administrate'. Leader. Not 'protagonist'. Low cost (if you can't abide cheap). Not 'inexpensive'. Enough. Not 'sufficient'. Begin. Not 'commence' or 'initiate'. Often. Not 'frequently' First. Not 'initial'. Wrong. Not 'incorrect'. End. Not 'conclude'.


Use. Not 'utilize'.
The longer word also implies evasion. The Anglo-Saxon alternative is more emphatic and understandable. Less is more.


Punctuation is another problem.
PTY LTD, not PTY. LTD.
The rule is simple. No period if the last letter of the word is shown. Hence: Dr, Mr, Ms, St, Rd.
And: Ave. Co. Prof. Inc.
Then the possessive. Fred's house. A year's holiday.
But if the noun becomes plural, the apostrophe moves to the end. Five years' holiday. Ten mens' houses.
Alright?
Wrong. It's 'all right'. Alright is all wrong.
As for pronunciation (no, not pronounciation):
It's stAYtus. Not STATus.
It's DAta. Not DARta.
It's KILLometre. Not kilOMeter.
It's CONTroversy. Not conTROversy.
It's MEMo. Not MEEMo.
And why are things never unique any more? But always more, very, totally or rather unique? You can't qualify an absolute. So you can't say absolutely amazing, very exceptional, more special and most ideal. Tweak words expressing finite value and your ignorance shouts. Something is either unique or not.

Speaking of ignorance:
It's adaptation, not 'adaption'.
As for imply and infer... I can imply something and you can then infer something from that implication. So if I infer something, I do it from another's words, acts or attitude.
This brings to mind the other sure-fire sorter of sheep from goats:
Less and fewer.
The rule of thumb is that less refers to quantity or amount, fewer to individual items or number.
So fewer people now have less money.
And those with less courage have fewer opportunities.
Tell this to the ABC. Many have. But, unfortunately, nothing would change if you emailed them for a year.
As for the Subjunctive, it's a mood almost extinct. (What is he talking about here?) Well, as one rule of thumb, if the sentence refers to the hypothetical, use 'were'.
'If I were (not was) brave enough, I'd try sky-diving.'
'If I were you, I'd hit him.'
Then there are misquotes and mistaken words. For instance:
'At one foul swoop.' It's fell - meaning fierce, terrible.
'Abdicate responsibility. Abrogate please - meaning cancel, repeal. 'In the lap of the gods.' To be over-pedantic in this list of pet peeves, Homer actually said 'on the knees of.'

Why bother with all this?
Because, although the English language is adaptive, it still needs care.
So next time you reach for the slipshod construction or threadbare phrase, consider how you could say it in another, simpler way. If we bothered to do this, language would flower.
And, yes, it's worth the attempt.
Because each effort to be a little more intentional about what we say makes a difference.
Help free speech!
You'll find Clint's books on Buzzword.
Posted by Buzzword Blog at 18:32 0 comments