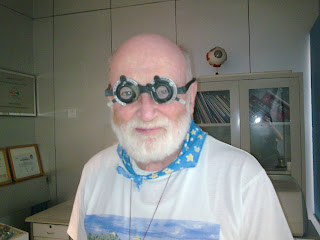 David Farnsworth's latest poems are increasingly clear sighted. They ruminate on cold days in Ballarat, the virtue of inebriation and more.

If you want more of this fine poet's work, check out this link: Middle Kingdom. A take on world travel through the poet's eye and an anthology worth reading.

The red wine danced in the glass
a darker red than blood,
the sun travelling through the wine
to the tablecloth beneath.

Are reflections a heightened way
of seeing? - So much variety
depending on whether it's windy
or not. The ruffled waters

of Lake Learmonth, with ribbons
of yellow and blue capturing
the late afternoon sky.
As usual, I don't stop.

It's the still days with water
where reflections reach great
heights - where even the seemingly
mundane is magically transformed.

The fruit fly was water-skiing over
the sweat on my chest. I felt
woozy. "Do you have a fever?" asked
the medical guru.

"I feel about as normal as ever
which I admit is not terribly
normal." I stood up.
The fruit fly went rapidly downhill.

That's the way with life. Just when
you feel comfortable, somebody tips
the table and some normality
disappears. Like the Government

taking $90 a fortnight from
my pension, but what's not to like
for the liver with the prospect of 6
fewer bottles of red wine passing

through its system? It may even
survive a few extra weeks.
Are you aware of the unusual strain
on the legs when running downhill?

I thought not. Avoid it all costs.
Walking is permissible; like downhill
from Mt Bogong; over snow drifts;
through the mountain ash; now but a memory.

The Dark Side of the Moon.

The fruit fly abseiled up my nose hair.
I made the mistake of dipping my nose
in the glass of gin. The fly landed on
an ice block and wondered whether he
had landed on the dark side of the Moon.

I assured him he was still on terra firma.
He proceeded to the rim of the glass and
began to dry his wings. After the immersion
in the gin he tottered slightly. He was not
the only one.

The fruit fly is still here, always within
reach of my nearest glass. What a mean
occupation! How limiting! I tried to educate
him with other beverages but he's not
having any. We are both tied to our old ways.


With my powerful magnifying glass
I noticed my friend wearing Lycra.
I suspect (know?)he was hit by the cycling craze.
Many other fruit flies were in Lycra.
All had tiny bicycles. The Lycra grabbed
their crotches, so  you could see who
had been circumcised and who had not.
I'd made the mistake of sprinkling salt
on the table cloth. "These stones are rough,"
whined my fruit fly. It didn't last. Soon he,
and his fellow flies, all male, cycled around
a small puddle and then stopped at a small
shed-like building where they entered and
enjoyed a cappuccino, late, long black, whatever.
The owner of the shed was smiling.
Now, whenever my fruit fly is due to ride,
I cover my alcohol
with Glad Wrap.
I can't afford the wretch being pinged for .05

Out of the Window

Hi, my name's Fernando. I'm a fruit fly. I live with David.
He lives with me. Whatever. The alcohol here is unlimited, and
such good quality. You might have noticed we fruit flies love our
alcohol.

David has given me the task of writing this piece. He has told me
to write fast, don't stop and be as trivial as you like. I like the
last one.

I am writing this perched on the rim of a glass containing
a stiff gin and tonic and a slice of lemon. While I write, David is
reading Bleak House by Charles Dickens. The poor man is up to
page 587. Only another 413 pages to go. And there is much
housework and gardening waiting for him!

On the nature strip opposite, a couple of magpies have taken
possession, hunting off a couple of blackbirds, who were there first.
I feel sorry for the worms. It's been a wet year. Luckily here, the
pickings for the spiders  have been so poor, they have decamped, so I
don't have a worry in the world.

The red car opposite has just moved off. People in this street come and go
all day. There's always something to notice. The red car people are
all female and always, in the weekends, filling the car with beach
equipment. Oh, that we could be so lucky. David tells me we are off
to Maryborough tomorrow. "Can you manage four hours without
alcohol?" he asks. "I guess we will make up for it on our return,"
I reply.

My technical name is Drysophila. (The red car has just returned and
is disgorging passengers) David tells me that he and a few mature-
aged students (teachers) were attempting to pass a diploma studying something
called Biology as part of a Social Sciences course. They were studying the
mating habits of the Drysophila. He and a friend failed the subject four
times.  I often worry about the intellect of David.
To get him and his friend to graduate, they deleted the subject.

David has refilled his glass. I just managed to avoid the bubbles from
the tonic water smudging this page.

The pink flowering-gum overhanging this window is festooned with gum nuts.
The new flower buds are swelling. Two weeks ago, four spotted pardolates
were feeding on insects, which were feeding on the leaves. They improved
the tree's health. One good turn deserves another.

After a -2C morning (8C in the house), the sun shone, the sky
was a deep blue and as I write, the sun is sinking, as it does, in
the west.

South-west at night, you get the lights from the trotting track.
David says I would love it there. There is so much alcohol in the
Flying Horse Bistro.

Ye Gods and Small fish. What a
revolting ornament! It looks like it's
fallen off a plumber's truck. Maybe it
would look better from a different angle?
Maybe not. Actually, when I first saw it,
I thought it was a pig. If seen on a dark
night, it would probably frighten small children.
Wake me when the five minutes is over.