WHOM WOULD YOU DIE FOR?*

(*See end note on who/whom.) We asked Gina Stoner to expound a little more on her philosophy. Gina is the author of the profoundly simple and ostensibly 'young adult' novel, TALKS WITH AL, now available on Buzzword. 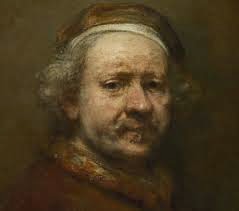 You are in some terrible gulag. You are nineteen. With you is a supreme artist who has not yet filled his potential. And you know his potential because you are aware of the possible future and have an adult mind. Your companion - depending on your personal passion for art - is the young Bach, Mozart, Rembrandt or Van Gogh.

And the guards at this gulag are determined to shoot one of you. They will either shoot you and spare the other. Or shoot the other and spare you. It's your choice.

The firing squad is there and waiting on your decision.

What will you do? Will you die so that The Art of The Fugue, The Magic Flute or Starry Night will not be lost to the world? Or will you destroy your companion and live?

Now forget this question for a moment and read on.

A fundamental concept of self-transformation is the notion of two worlds.

All of us are obliged to live in physical surroundings. We know the taste, weight, resistance of things and the need to struggle against the entropy that will eventually destroy us. We are threatened forms—soft creatures in a hard world. And we know the outcome of our brief time here. Suffering, decay and death.

So we defend ourselves at all costs—and this makes us reactive. Not that instinctive reactions are foolish. (We need to pull our hands away from a flame or step back from a cliff.) But psychological reactions plague us and destroy whatever latent possibilities we possess.

This inner world of personal psychology includes our emotions, thoughts, and physical tensions. It includes our greed, envy, stupidity, dreams, opinions, regrets, ambitions, fixations, ignorance and all our self-defending strategies. This vastly over-elaborated territory is a morass of inter-reactions. Our thoughts drive our emotions. Our emotions drive our thoughts. And our body suffers from tension which, in turn, reduces its immunity to disease.

So we have an inner world and an outer—neither under our control. Because where is the 'our' in this? 'We' exist as automatonsa—functions of physical and psychological drives.

But, as we prefer not to see ourselves as functions, we develop a touchy ego. This hoary self-defence, common to humanity for thousands of years, has become both blessing and curse. It's a cumbersome shell for those wishing to shield themselves and a barrier for those intent on self-enquiry.

The aim of religions everywhere is to reconcile the opposites - to 'justify the ways of God to man'. In this beautiful, callous universe, we exist as an aberration—unsure of our role, importance and function like cosmic orphans without a map. Religions claim to fill this gap. Unfortunately, their dogmas have degraded into forms so antiquated, illogical and self-serving that they increasingly appeal to credulous self-calmers and fanatics.

The problem for people intent on self-transformation is that both processes are automatic. If even our most prized emotions and thoughts are reactive, what is there left to call ourselves?

And yet all religions advocate an inward turning - generally degraded to the supposition called belief - belief in a God of some kind that will dole out justice to the faithful. Curious when mud-slides envelop schools of infants, when priests sodomise children and dictators commit genocide. Fate clearly does not care.

Perhaps the vast manifestation of the universe has more to be concerned with than the hidden potential in flawed bugs on a planetary speck surrounding a third rate star in a galaxy that is one of billions. But this is far too demeaning for our egos to accept. We believe our minds to be the most complex entity created and, with insufferable hubris, see ourselves as the centre of everything. We resemble superstitious savages craving favours from an arid moon.

The solution is not to find a solution. It is our seeking, our finding, that destroys us. Because, as we are, everything we do is automatic. And only repetition can be expected from a machine.

So is no way out?

Some more cryptic teachings, define it as the reconciliation of the opposites.

These teachings see the human primate as a transitional form—more than an animal but, unlike animals (which fulfil their function perfectly) flawed. We suffer from the advantage of the terrible disadvantage of being imperfect. And this is precisely our possibility. Our ability to muck everything up is also the narrow gate of escape. Without the choice to make a hash of things, we would remain perfect organisms with no option of inner evolution.

And how, exactly, does one reconcile the opposites? According to these teachings, we need to live in two worlds at once. In the frantic, fearful physical world and the inner world as well.

A third factor is required. And this is basically defined as 'attention'. But this attention cannot be arrived at by taking thought. It is not mental, physical or emotional but rather an amalgam of the three. It is an inner attentiveness that does not define, take sides or use words. A watchfulness so simple and profound that is rarely understood. But, even if we have some inkling of this practice, we almost always neglect it. As for the great bulk of humanity in its quicksand of thoughts and emotions, it is far too distracted to perceive this way of being.

THE COST OF ATTENTION

How to come to this mysterious catalyst? Methods exist but eventually become counter-productive. Real things are not cheap. Understanding must be earned. This watchfulness, this third factor that can unite the other two comes at great cost because the payment is ourselves. Ourselves as we see ourselves now. Ourselves as all we hold dear. We must cast everything into the fire. Only then does the third thing appear.

So is the struggle worth the candle? What's the point?

The point, according to these teachings, is to become what we essentially are. To smelt the dross so only the gold remains. Or, if you prefer, to turn base metals into gold—the analogy used by the alchemists to protect themselves from a vicious church hierarchy while safeguarding their inner, or psychological, techniques.

So what happens if we give up everything we are?

Are we then nothing?

NOTHING WITH A CAPITAL 'N'

These teachings assert that, at root, we are genuinely nothing. But that 'nothing' has a capital 'N'. Because this enquiry is a quest for unity. And that is not personal but cosmic.

Unity in diversity is one of the key concepts of esoteric thought. And we are challenged to stand between the Unmanifest and Manifestation. That is, not to seek shelter in either. Our place is between. We are constructed, potentially, to keep a foot on either side of the stream.

We are told that the true function of humanity is to stand between the opposites—as this objectively creative act assists the development of the universe. Certainly, the universe can develop well enough without us. But our fearful and wonderful construction allows us, potentially, to join that process and become something other than we are. Something with the potential to exist for a time at least beyond death. The analogy of a seed is useful here. We are a potential only. You are a seed. Thousands of seeds are scattered but few germinate.

So this is a quest the bulk of humanity will never discover or pursue. Nor should it. The gate is strait, as the Bible points out, and for the few. For the few tormented by certain vital questions such as: Who am I? Why am I here? What is my purpose?

To stand between the opposites we need to lose ourselves to find ourselves. Or, expressed another way, to become more conscious—to wake up.

IS THE BASIS OF EVERYTHING CONSCIOUSNESS?

Quantum physics has shown us that things are not as they seem—that particles sometimes act more like information than matter and that most of the matter and energy of the universe remains hidden despite all our technology. Some cosmologists even postulate that the basis of everything is consciousness.

As for consciousness itself, science has long sought to define or explain it—so far with no success. We do not even know why things exist.

So is all this gobbledygook?

Are we, incredibly, amazingly, designed and called to assist the expansion of universal consciousness?

If such a calling speaks to you and you remain sincere—the only life raft you can depend on in this quest—then, despite the greatest obstacles, you will eventually find your way.


AGAIN - WHOM WOULD YOU DIE FOR?

You remember where this started. It is either you of Mozart. Either you or Van Gogh. If I were faced with this choice, there would be no discussion. I would certainly agree to be shot so that such genius could benefit the world.

Perhaps you would as well.

Some of us would gladly die to preserve Rembrandt or Bach. So why will we not do that for ourselves?

* Note on Who and Whom: For those who object to formal grammar, prepositions should be followed by the objective case. But when a preposition comes after the word it governs, the nominative might be used erroneously instead of the objective. Then we would have, Who would you die for? But this sentence needs to be unpacked. Reverse the phrase: You would die for whom? This shows that who (nominative) should be changed to the objective form whom. Thus it is not Fred and me went to the game. But Fred and I, no matter how plummy that seems and no matter how much British soaps use that construction routinely. Consider Fred (nominative) hit me (objective). This shows that 'me' is the objective construction.