HOW TO GET WHAT YOU WANT 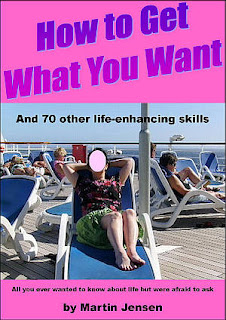 Martin Jensen, despite his tendency to smugness and intolerance, is the universal man. And his formidable knowledge is augmented by his partner, the fetching Dr Jensen. Their passion is effective living. Jensen's first humorous sally, How to Exercise has already been downloaded by a horde of eager eBook buffs. And his second, How to Get What you Want is now published on Buzzword.

This new book covers everything - from japes that fascinate infants to the intrigue of the Sporting Fly Swat.


It explains how to see without your specs, how to change traffic lights to green, how to dislodge rusted in screws, how to amaze small children by moving both eyes independently and even how to laugh at death.


It even instructs on manners, sentence construction and has strategies for everything from drying between the toes to bamboozling pretentious art critics.


What is unexpected about these sugared pills is all are practical. Beneath the humour lurks sense. And even readers intent on diversion emerge not only happier but also wiser.


But to indulge our literary leanings, we want to include one section that deals with English expression:


How to disguise your ignorance


We assume, that like most people, you have only a rudimentary understanding of the language and betray this to your betters whenever you speak or write.


So we now list some of the most typical gaffes you should avoid. Then at the next garden party or when penning your CV, you will not appear so laughably crass.


Infer and Imply. I imply something. You infer what I am saying from that implication.


Unique. A thing can't be more, rather or totally unique. You can't qualify an absolute. It is either unique or not. So 'absolutely amazing', 'completely exceptional' and other bastard constructions show your ignorance.


Never say neither. Neither is confined to the construction 'neither... nor. Similar to either... or. The word is either. To use neither is the deadest of giveaways. It confirms that you are bog Irish, illiterate, thick, and were dragged up in a hovel with nine runny-nosed siblings.


It's adaptation, not 'adaption'.


It's all right, not 'alright'. We refer to spelling here.


Avoid bureaucratic language such as 'give consideration to'. Use consider. Say transport, not 'transportation'. Enough, not 'sufficient'. Begin, not 'commence' or 'initiate'. Use, not utilise. Now, not 'at this point of time'. Often, not 'frequently'. First, not initial. End, not 'conclude'. The longer word is the fear or weasel word and suggests you're afraid to say clearly what you mean.


Simple words were good enough for Shakespeare. Hence, proactive, prestigious, hospitalisation and their ilk are to be avoided like the plague. So are clichés like the one just written. And please do not trot out 'devoutly to be wished', 'when the tumult and the shouting dies' or other such creaking borrowings. They descend like hammer blows on discriminating hearers.


Now analyse that previous sentence. Can it be improved? As Gertrude Stein explained to Scott Fitzgerald, a sentence must not 'leak'. In other words, must not dribble off. Thus the previous sentence should read: 'They descend on discriminating hearers like hammer blows'. This is better but not ideal because the sentence was constructed to prove a point and, to provide an even finer euphonic balance should have been recast as: 'They descend like hammer blows on discriminating ears.'


We do hope you are finding this hard-won advice germane. (Eliminate the 'do'. Remove all useless words.)


Any one who wishes to be a good writer should endeavour, before he allows himself to be tempted by the more showy qualities, to be direct, vigorous and lucid.


This general principle may be translated into practical rules in the domain of vocabulary as follows:


Prefer the familiar word to the far-fetched.


Prefer the concrete word to the abstract.


Prefer the single word to the circumlocution.


Prefer the short word to the long.


Prefer the Saxon word to the Romance.


So much for Jensen on English. In case you think the book is hard going, here's another section:


There are certain practical rules you violate at your peril. These are:


Despite what every scammer tells you, no one knows what the market will do next. So avoid optimism, systems and plans.


And, as the majority is usually wrong, only put faith in negative hunches.


Remember that, when you finally hear the rumour, it's either designed to mislead you or it's too late to act on it. In other words, don't hop on the bandwagon. Because, by the time it heaves into view, the market manipulators have already taken their profits and you've been set up for the slippery slide.


And remember that when interest rates rise, asset prices fall.


As for the gnomes of Zurich, they would never diversify their assets. That, according to the experts is the way of the poor and uninformed. The experts place their funds in one sure bet and wait for it to make a killing. A risky stratagem for most. But, if you know what you're doing, far more lucrative than conventional hedging.


Dr Jensen has invested some of her money in a Braille library that also sells kitchen-ware. Recently one of her blind subscribers mistook a nutmeg grater for a novel. When she brought it back, she complained about it bitterly - said that it had no plot and was the most violent thing she'd ever read.


Still too serious for you?  Try this:


How not to wreck a good relationship


Dr Jensen has importuned me not to include this theme in case my instinctive aversion to marriage should offend the conventionally moral. So I have promised not to comment and merely to include sayings from many lands concerning the triumph or hope over experience:


No love so hot but marriage cools it.


Advise none to marry or to go to war.


Every woman should marry but no man.


A young man should not marry yet. An old man not at all.


Marriage - a remedy too strong for the disease.


Losing a wife can be hard. Often impossible.


Marriage - an expensive way to keep warm at night.


Monogamy, like bigamy, is having one wife too many.


Man is incomplete till married. Then he is finished.


You don't know what real happiness is until you get married. But then it's too late.


'You're lucky if your wife is an angel because mine's still alive.'


Well, enough on the ultimate tragedy.


Except to say that marriage ignores the biological fact that monogamy is deviant behaviour. This is well expressed by a cautionary verse that should be poker-worked into each vestry door and tattooed on the forehead of every celebrant:


My favourite saying on the subject is this:


Marriage is like aviation. One is never lost. Only temporarily unsure of one's position.


And, of course, if you don't know what to do, ask a woman and do the opposite.

And for light relief:


How to move both eyes independently.


Small children are astonished by this skill. If they think you are eccentric now, imagine how they will revere you when you blithely perform the impossible!


Method: First cross your eyes. Now, keeping one eye crossed, move the other out to the side, as if trying to look at your ear on that side, if you have one. Then return it to the crossed position to match the other eye.      Yes, it can be done!


Try it now in front of someone who respects you. The moment they grimace with disgust and say, 'Yuk!' you know you have succeeded. Now practise with the opposite eye to augment your ability. Remember that all worthwhile skills require application and that versatility is the essence of theatre. And that who dares, wins. And that every silver lining has a cloud.


Truly, to meet infants on their level of fatuity is a talent that will never cease to bring you, and the other small minds you encounter, simple and abiding joy.


How to Get What you Want, now published on Buzzword, will set you back a mere 99 cents.