DARWIN AND THE DEATH OF TRUTH

Author Gina Stoner muses on an early study in straight and crooked thinking (and what is this small creature? See end): 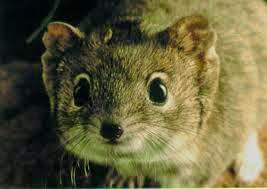 In 1944 - at the exhausting end of a devastating world war - Dr Kenneth Walker, a disciple of The Fourth Way, completed one of his many books. It was called Meaning and Purpose and designed to show that the universe was not a mindless juxtaposition of warring forces but imbued with intelligence and life.


Since this book, long forgotten now, was written, science, philosophy and transformational systems have moved on. But not that far. And its arguments remain informative.


What follows is not even a bare outline. Simply sections selected at random, then paraphrased. The intention - to give a flavour of the whole. (The book was reissued by Penguin in 1950.)


Two centuries ago, science was seen as the supreme inquiry - able eventually to develop its own metaphysic. Sadly, little has changed. The vainglorious human still sees himself as the centre of the universe, still considers his mind as the most complex thing in creation and believes he is able to reduce the cosmos - something incomparably greater than himself - to a set of numbers and assertions.


The young Darwin and his intellectual shadow, A. R Wallace both read Malthus's Essay on Population. It outlined the struggle for existence of an increasing population faced with decreasing food supplies and projected that only the strong would survive. Both men borrowed the thought, applied it to animal and plant species and a theory was born. Scientists seized on the new concept which, to their relief, appeared to eliminate once and for all the myth of religion, the possibility of a creator, and also to excise from cosmology all lingering vestiges of design and purpose. At last, they had something they could handle - a pitiless, meaningless universe controlled by blind forces. A pinball series of reactions able to produce complexity without intelligent input.


Bergson, the philosopher of change, had a different view. He said that by using the intellect we may 'take views of life, we may go round it and note its relations, its varying aspects, we may frame and fit it into our scheme of an external order' and, by using what he calls intuition, 'we may enter into it, live its life, follow its movement from within' in which case life appears to us as not a procession of separate states but as ' a continuously moving zone of activity'.


Bergson perceived life as the élan vital and asserted that evolution of life on this earth could not be accounted for unless such a creative force was assumed - for otherwise it was impossible to understand why evolution has not, long ago, come to an end.


As he wrote: 'A very inferior organism is as well adapted to the conditions of existence, judged by its success in maintaining its life. Why then does life, which has succeeded in adapting itself, go on complicating itself more and more dangerously? …Unless there is an impulse driving it to take even greater and greater risks toward its goal of an even higher and higher efficiency.'


Darwin himself had many doubts and qualifications about his hypothesis. But the basic scaffold of his theory is now so popularized that it has degenerated to folklore, much as the complex insights surrounding the idea of rebirth were simplified to the palatable notion of reincarnation.


As Haldane stated: 'No competent biologist doubts that evolution and natural selection are taking place, but we do not yet know whether natural selection alone, acting on chance variations, will account for the whole of evolution. If it will, we shall have made a big step toward understanding the world; if it will no more account for all evolution than, for example, gravitation will account for chemical affinity, as was once believed, then biologists have a bigger job before them than many of them think.'


According to Walker, The Darwinian theory, like the mechanistic Manifesto of Marx, provides an intensification and oversimplification, devoid of all qualifying phrases, doubtful issues, extenuating circumstances. Yet both claimed to contain the master keys by which all doors could be unlocked.


Darwin's hypothesis, to the relief of many, replaced the need for a God. Because, when mere bricks can build a house, the builder is no longer required. And we become the sole representatives of intelligence in an automatic, lifeless universe.


Or can we admit as Zeno postulated 'that the world is a living and rational being since it produces animate and rational entities? Surely this is less presumptuous that to imagine that intelligence and consciousness are the unique prerogatives of humanity. Faced with an infinite universe, the hubris of this view is immense - yet it has now become folk law as well.


The problem here is the fragility of truth. Truths, like religions, die. The original insight is distorted, debased, twisted to suit a purpose, simplified to calm the unintelligent until nothing remains of the original animal but fur and feathers. Then the fossil of the once living insight is debased enough to be accepted as gospel.


To quote Ibsen, the only truths acceptable to the majority are truths 'so stricken in years that they are sinking into decrepitude.' Truths, he declared, live only some twenty years and when they become as old and emaciated as this they are in a fair way to becoming lies.   …It is not until then that the majority takes them and recommends them to society as wholesome food.'


Degraded truths for the masses is the rule.


The effect of crowd psychology is well documented - as is the effect of uncompromising leaders on a mob. In fact the latter are the result of such crowds, not the cause of them. Hitler was a symptomatic of the general mood of Germany at the time. When the masses lose their reason a Hitler always appears. And his first concern is to destroy freedom of the press, free expression of ideas, rights of association by establishing a police state and a pernicious system of informers.


Walker points out that perhaps the whole of history can be looked upon as 'the conflict between culture and barbarism.


He points out that civilizations are founded not by mobs or committees but by individuals with new perspectives who institute new forms of culture. 'Civilizations, based on these cultures, lead to the establishment of an ordered pattern of life. They last for variable periods and are then destroyed, and are replaced at a later date by some new form of culture.'


'Totalitarian forms of government have been followed by totalitarian forms of warfare. …Total warfare has the same effect on a population as have the barbarous forms of government which it is the object of this total warfare to destroy. …Wars solve nothing. They are periodic episodes in the life of those low forms of organisms known as nations - episodes to be endured as earthquakes, hurricanes and other terrestrial phenomena have to be endured.'


In the Republic, Plato wrote. 'An ordinary city, however small, is in fact two cities - one the city of the poor, the other of the rich, at war with one another.' And it is absurd, Walker believes, to cherish the idea of a classless society as it has never, and never will, occur.


Plato's famous contention was that we do not study reality itself but only the shadows it casts on our minds. Kant held a similar view. Now some physicists, faced with the increasing explicability of nature and existence are entering the territory of what Eddington called scientific epistemology. Jeans likened scientist to experts examining the bubbles which, from time to time, emerge from a stream. He wrote: 'These are the transfers of energy and radiation of our life, which affect our senses and so activate our minds. Below these lie deep waters which we can only know by inference.


As Plotinus wrote: 'Knowledge has three degrees - opinion, science, illumination. The means or instrument of the first is sense. Of the second, dialect. Of the third, intuition. To the last, I subordinate reason. It is absolute knowledge founded on the identity of the mind with the object known.'


Do some of us have a facility that does not depend on empirical evidence - that is sometimes able to reach knowledge which lies beyond the range of the senses?


According to Walker: 'One thing is certain, namely, that a synthesis of knowledge will never be achieved from below, but must proceed from above.   …From the discursive and analytical knowledge of science it is impossible to reach these higher principles, but working in the opposite direction, the contradictions in the lower levels of thought disappear.'


The wisest of men have always declared that we know nothing. That all our so called knowledge is relative. That there is a far greater reality of which we only see the edge.


Certainly the warring brothers called science and religion are never likely to agree as they see everything from opposite perspectives.


But is there a third way to discover reality?


Walker thinks there is.

(The picture at head is a Mulgara - native to Australia.)